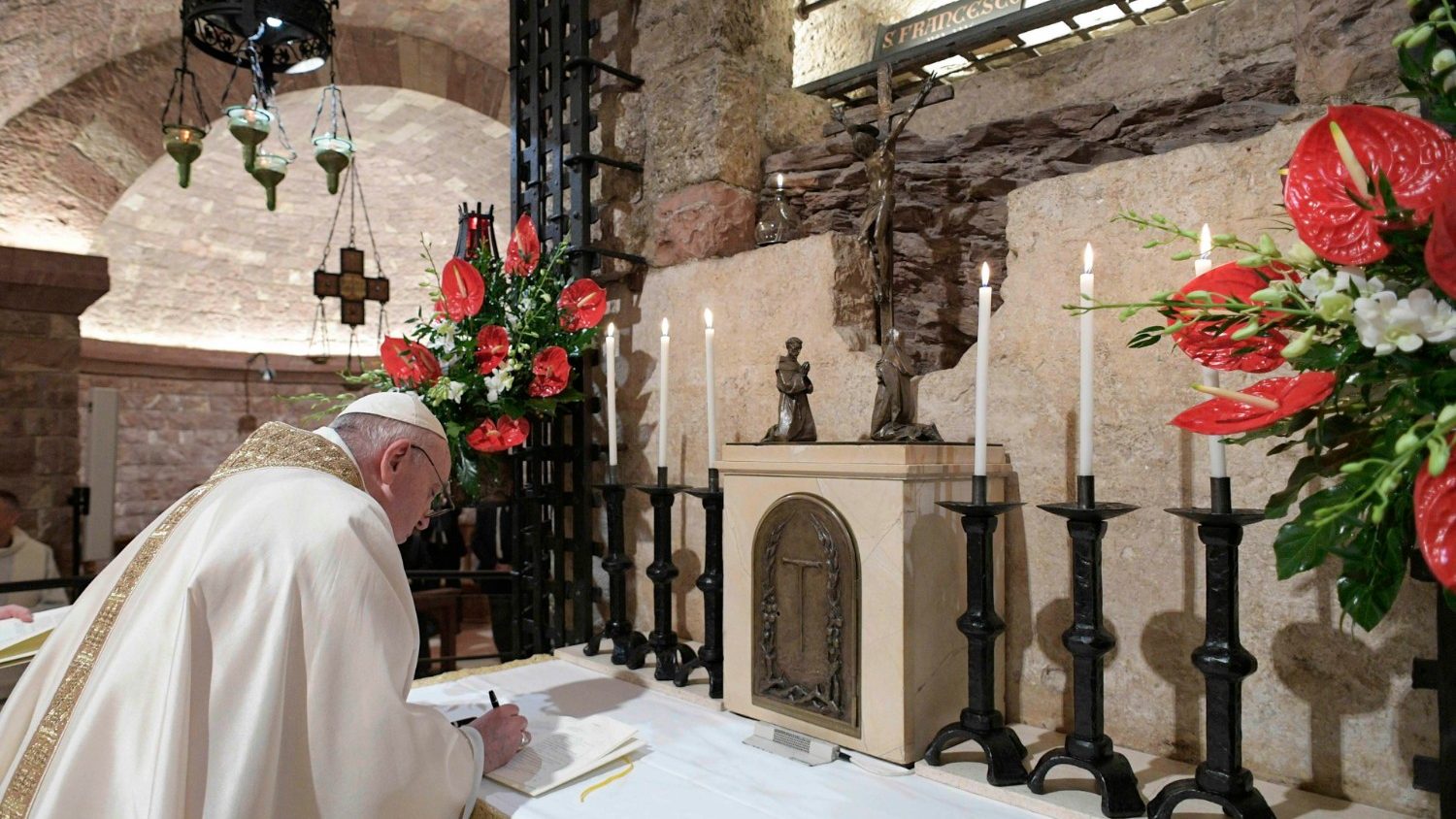 Xavier Jeyaraj. As a Jesuit and more so as the head of the Social Justice and Ecology Secretariat for the Society of Jesus, I found Fratelli Tutti (FT), to be an amazing synthesis of the social teachings of Pope Francis over the last 7 ½ years. Unlike other encyclicals that refer quite frequently to saints, previous Popes, previous encyclicals and biblical texts, this one draws references from his own various addresses, homilies, international meetings, writings, discourses and more specially from Laudato Si’ (LS). In FT, one can find myriad ideas that could help one to enter into a serious study, prayer and reflection for days and months.

Pope Francis acknowledges the inspiration he draws from his meeting with the Grand Imam Ahmad Al-Tayyeb in 2019 and their joint document on Human Fraternity for peace. Besides, he refers to many statements of Episcopal conferences from all over the world.  I suppose this gives not only recognition to the discernment of the episcopal conferences but also actualizes his invitation to synodality.

His framework is Christian but his approach is very clearly ecumenical and inter-faith calling for dialogue with complete openness to truth and love. He does not claim to offer a complete teaching but only opens the door for genuine dialogue with everyone.

Now coming to my personal reflection on the encyclical FT, I read this as a Jesuit, particularly from the perspective of our Ignatian spirituality and our Jesuit mission of Reconciliation and Justice. Pope Francis has written three encyclicals and five Apostolic Exhortation. I see a tremendous connection between these encyclicals and the documents of General Congregations (GC) 35 & 36. Both these GCs call us to establish right relationships, in a mission of Reconciliation and Justice with God, with creation and with one another. Lumen Fidei, written mainly by Pope Benedict but signed by Pope Francis, and Evagelii Gaudium, call for reconciliation with God and a close personal relationship with Jesus. Laudato Si’ calls for reconciliation with creation, and Fratelli Tutti orients us towards reconciliation with one another, as brothers and sisters. We can also see a tremendous (an intimate) connection with the four UAPs – showing the way to God, walking with the marginalized and youth and care for our common home. The three encyclicals confirm our challenging mission.

Now, looking at FT, is there anything from Ignatian Spirituality that I see reflected in the encyclical? Yes, I can see clearly the Spiritual Exercises and the process of See-Judge-Act.

From the Perspective of Spiritual Exercises

The first chapter of FT for example, titled ‘Dark clouds over a closed world’ took me to the meditation of the incarnation, where the Trinity looks down on the earth. They see what is going on. It is not merely seeing but clearly applying the five senses of seeing, hearing, touching, smelling and observing. In fact, the first chapter sets the scenario for FT. It identifies the lights and shadows, challenges and opportunities. It presents the reality as Pope Francis, the Vicar of Christ sees today. He sees the world as a fragmented, shattered one, without any shared roadmap with no human dignity and respect for one another especially the poor. At the same time, the world with an abundance of resources, scientific and technical knowledge and human wisdom that can solve problems and give new hope, love and aspiration. He sees this particularly from the works of solidarity done by people during this time of Covid 19.

Chapters 3, 4 and 5 can be like the second and third weeks of the exercises, when Jesus lives the message he preaches. These chapters speak of creating an open world.  A world that is not closed, not exclusive, not centred on oneself but a world that is inclusive, based on universal love, compassion, equality, and solidarity. It is not limited to having a world that is open for everyone but a heart that must be open. This is clearly articulated in Chapter 4 titled “A heart open to the whole world”. He advocates the moral and ethical principles of love, justice, desire to learn and appreciate one another etc., for establishing good relationships with one another. Like Jesus who commented strongly on unjust rulers, Pharisees and Sadducees, FT also critiques the present-day political and economic structures and the styles of leadership.

I see Chapters 6, 7 and 8 as an invitation to everyone to experience the resurrection and renew oneself and the human society at large. FT speaks about a society that a) dialogues with one another, irrespective of their origin, birth, nationality, race, colour etc., b) builds bridges, even with those who do not agree with us, and c) creates a new culture based on truth, forgiveness, love and peace. Chapter 8 at the end mandates everyone, like in the Contemplation to obtain Love in the Spiritual Exercises, to go and live it to the full. FT appeals that Religions must be at the service of humanity in the world and he makes a prayer to the Creator for that new world.

This might probably sound a very simplistic summary of the encyclical, but as a Jesuit involved in the social justice and ecology ministry, I find this very helpful for me and I hope it is for you as well.

Secondly, it is said that our approach must be See-Judge-Act. However, it might probably be better to speak of see, discern and commit, rather than see, judge and act. Seeing must be done by an application of the five senses. Secondly, it is discerning and not simply judging with our mental faculty and thirdly committing and not simply doing things or having many activities and programs. This commitment must emerge through a collective discernment. FT presents this approach quite clearly.

At the start of Chapter 1, Pope Francis speaks about ‘shattered dreams’ in points 10-12 and in the last chapter he speaks about the Collective dream for a better world. So the encyclical moves from a shattered dream to a collective dream for building a new heaven and a new earth, a world that is not individual-centred, where all are equal pilgrims and fellow travellers.

Finally, what would I have liked to hear from Pope Francis in FT. We are aware that there were many criticisms about the title Fratelli, particularly from English speaking countries. Personally, I have no difficulty about the title being Fratelli Tutti, knowing that this phrase is a direct quote from St. Francis of Assisi and so, to maintain that in the title is perfectly fine with me. But…

We all know that Pope Francis has been very sensitive and has articulated the sufferings and the voices of women in many of his addresses and homilies. He has listened attentively to them on various occasions, and has also included women within the structures of power in Vatican. Given his sensitivity and profound understanding on the issues related to injustices done to women in the world and in the Church, I would have liked to see a chapter devoted to women, who comprise half the humanity in the world. I am missing this aspect in this defining social encyclical of our time today. My hope is that he will come out with a document with a special focus on women and their role in the Church.

I do not want this point on women to overshadow the many wonderful things that are written in the Encyclical. In fact, I would say FT is a defining document, which reaffirms all our Jesuit decrees and social documents, which have come particularly after GC 32 with the clarion call for Faith that does Justice, option for the poor and more concisely in the recent times on establishing right relationships through Reconciliation and Justice with God, Creation and People. In several places in the New Testament, Jesus meets up with people who ask Him what they should do to gain eternal life. Jesus...
Church

The synods of bishops celebrated up until now have always closed with the approval of a document that was either ratified by the Pope...
Spirituality

Walking the Ignatian Way: between Kairos and Bytes

Walking is one of the first apprenticeships that we undertake in our evolutionary process from the cradle.  As the years pass, from those first...