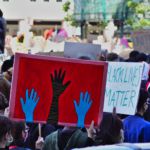 David Brooks. Observing from outside what we are now suffering in the United States -the protests, the destruction of statues and monuments, the violence against the police and above all the chaos of the coronavirus pandemic that continues to grow – it would be too easy to think that everything is crazy, that there are no echoes in other countries, and especially that “in my country”, whatever that might be, no such divisions exist because they have been overcome. And that would be a fantasy. A trap of false illusions. There isn’t a place in the world where cultural, social, economic, educational and political differences based on race don’t exist along with the resulting exercise of power by one racial group over another. END_OF_DOCUMENT_TOKEN_TO_BE_REPLACED