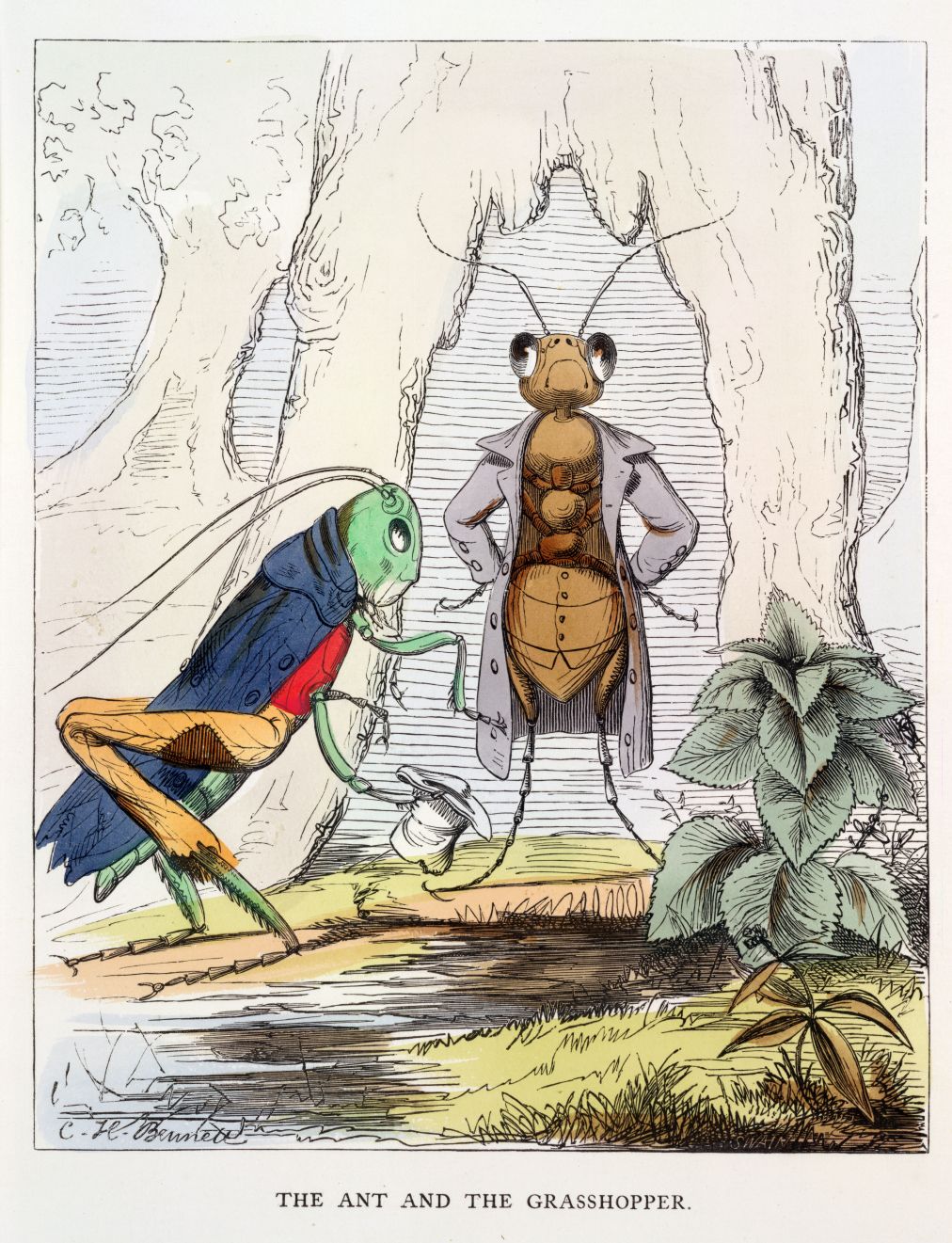 It is summer and we are in the woods. The sun is scorching everything. An admirable provider, the ant in the fable dedicates her time to gathering pieces of bread for the wintertime, while the grasshopper spends the time eating and singing. Autumn arrives and the scene is repeated (with less heat). But when snow is covering the woods and she doesn’t have anything to eat, the grasshopper stops at the door of the ant’s home and asks for food. According to La Fontaine, it is then when this happens:

What did you do during the summer?

she asked the persistent grasshopper.
-All day and all night, to whomever I met,
I sang. Don’t be upset.
-You sang? I am happy for you.
Very well. Now you can dance.

Although there are versions for children in which the ant shares the bread with the grasshopper, it is evident that moralism did not spare on cruelty at the moment of expounding its teaching. What could have been mild praise for forethought and work has been changed many times, sifted through the ideology of production, into representing a bad conscience with regard to free time and leisure.

But leisure is not threatened only by a possible exaggeration of stories against it (which end up affecting on the rebound meals and the song of grasshoppers), but also by its own repetition. Let us imagine, in imitation of the movie The Visitors (were not born yesterday), that a peasant from the High Middle Ages might land today in any one of our cities and find himself a job. Perhaps one of the most notable differences that he would experience would be that in the moment in which earlier he would have said “I have satisfied my needs, I am going to stop working and lay out in the sun”, that moment now would never seem to arrive (probably in his fief he would not be able to say it either because he had to deal with the needs of the lord). Let’s say it this way: in an era in which the possibility of accessing more things seems to have no limit, perhaps that man has only changed form. The computer can always be more powerful or with better applications; there will always be a new photo by one of my contacts on Instagram; the next trip, longer and for more time, including space travel; tomorrow we will have a new trending topic, and surfing the web will offer us new links, other searches. Although we might have repeated them a thousand times, they will always seem new. On the web, the possible territory for leisure ends up including the entire known universe, replicating itself and multiplying itself, from the photo of a beach in Thailand to betting in an English racetrack. The world multiplies itself and the possibilities for leisure also multiply. This vertiginous sensation of the lack of borders calls all of us to discernment. Logically, it could end up asking for the sacrifice of our time (and in some equally terrible cases, all of our money) without ever making a reality that promise of happiness that led the grasshopper to eat and sing instead of working.

But if it still contains a promise of happiness, it means that in leisure there is something that, down deep, is not worth changing. And not only that. If there is hidden in it one grain of gold of blessedness, it is because there is a period of rest that, although it continues to ask for time, (the second hand continues to go forward), in some way it returns time to us.

After six days of naming things, God is eating and singing in heaven. The seventh day of creation is not the eruption of one more thing in the world, but rather the emergence of the fullness of feelings and love for what already exists, without it’s being necessary to produce something more to make it better. They are feelings and a love that pacify the present time, and make fertile that which falls off of the sheaf and which seems to us is going to be thrown out. Leisure is a time which is called to produce, but not more things, but rather more time (although the clock keeps on ticking). In its world, there springs up that form of wide-open dialog that is prayer, or a reflection about that turn of history, or that dream in which we could live better. Within it, we read and contemplate good stories and we look at the blue of the sea or the top of a mountain. They are all places that are filled by time, interior fertilizer for sentiments and love. For that reason, the Eucharist – only possible on the seventh day – is the highest form of leisure: time to consume eternity.

If the grasshopper continued in her obstinate refusal to work, getting to the point of even forgetting about the existence of winter, perhaps her function in the story is to remind us that leisure is called to shed light on something, at least having the same value as the bread to the ant, although with the difference that it can’t be eaten or sold.

In a society that is profoundly secularized and where the Catholic Church loses the faithful at the same rhythm as the trickle of water...
Society and citizenship

The Lesson of the Cicadas

This year, in the part of the United States where I live, we have had an invasion of cicadas. Billions have appeared suddenly as...