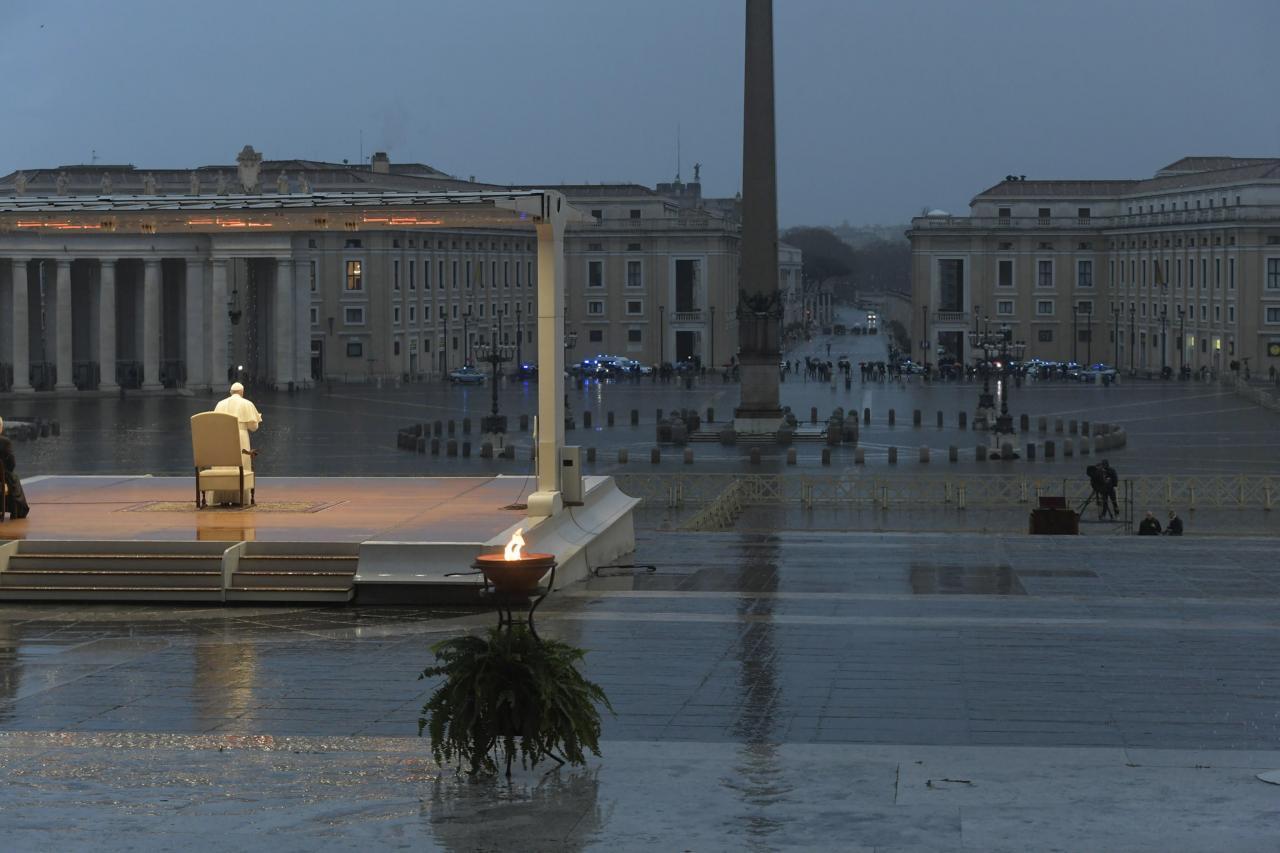 Home Monographics Coronavirus “Do not be afraid”

Víctor Codina. We will not easily forget the impactful white figure of Pope Francis, walking alone and in silence, on a dark and rainy Roman afternoon, from the Basilica of St. Peter to his seat in the totally empty Plaza, so that he could speak from there to the world. It brings to mind that other image of Francis going alone and on foot through the concentration camp at Auschwitz.

The newspapers have reproduced the image of the Pope facing the empty Plaza of St. Peter, but they have been silent about the content of his talk. They are the same media which proclaim to us terrifying messages that the worst is yet to come, that the number of those infected and of the dead will rise, that the hospitals and intensive care units are on the brink of collapse, that there is a shortage of respirators, masks and testing instruments, that there is a shortage of personnel and that the economic crisis will be very grave. In one word, they produce in us panic and fear. On the other hand, Francis reminds us of the words of Jesus to his disciples who were filled with terror on the boat that was tossed about by the waves on the lake of Genesereth: “Why are you so afraid?” (Mk 4:40)

When we, along with the disciples, think that it doesn’t matter to the Lord if we perish, Francis tells us that we are important for God, that we have to row in unison so that we might all be one, that the storm has unmasked our vulnerability and uncovers our false security blankets. The problem affects all of us. We have a common place of belonging as brothers and sisters. Together we form only one world. At root, the dilemma is between believing that we are self-sufficient or recognizing that by ourselves we will sink and that we need to invite Jesus on to our boat and have faith. It is a faith that consists not only of a belief in the existence of God, but also of moving towards the Lord and having confidence in Him that gives us serenity in the midst of our storms.

I am not talking about placing our confidence in quick miraculous solutions. We have to have a conversion of our mentality and life style. We have to discern between what is necessary and what is not, to set aside the confidence that we place in our routines and security blankets, to stop thinking that we are strong and capable of everything. We cannot be greedy for wealth, nor continue to be anesthetized against injustice and wars while the Earth is gravely ill. We have to change course back to the Lord and toward others, embrace the Cross of Jesus as the tiller of our boat, and accept the adversities of life. We should again encounter in the Cross the life that is awaiting us, knowing that the Lord has risen and lives at our side. We have to leave space so that the Spirit can act with creativity.

We should read slowly the homily of Pope Francis which ends with a prayer confiding the health of the world to the Lord through the intercession of Mary. “Lord, bless the world, give health to our bodies and console our hearts. You ask us not to fear. But our faith is weak and we are afraid. But You, Lord, do not abandon us to the mercy of the storm. You repeat again and again, ‘Do not be afraid,’ (Mt 28:5) and we, along with Peter, ‘unburden on you all of our exhaustion, because You care for us.’ (1Pt 5:7)”

At the end, Francis gave a blessing with the monstrance holding the Blessed Sacrament Urbi et Orbi, to Rome and the whole world. And then he withdrew in silence while it was still drizzling and night was falling in Rome. The streets were empty.

Josef Ratzinger, Benedict XVI, while he was still the Pope, wrote three volumes about Jesus of Nazareth. At the end of the second volume he also referred to the storm with the disciples on the lake while Jesus slept. When they woke him up, he rebuked them for their little faith. The storm to which Benedict alluded was an ecclesiastical storm: sexual abuse and scandals concerning the finances and Curia of the Vatican. Now Francis is not referring simply to a storm in the Church but to one that affects all of humanity which appears to be in danger. For that reason, his message and his blessing are for Rome and the whole world, Urbi et Orbi, because the problem is not only ecclesiastical but existential, vital, profoundly human. The millions of viewers who followed the ceremony on television surely felt comforted and hopeful, with less fear and more hope. Because the fundamental question is to choose between fear and faith.

For centuries now a great deal of music has been dedicated to the Virgin Mary, and for obvious reasons. From medieval times to our...
Spirituality

n my 40s my hopes were dashed three times. Yet at each dash, in each precipitous plummet that felt fatal, a mystical experience flooded...